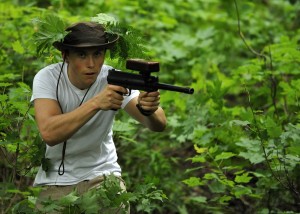 In May, in Virginia, two Grade Two boys were suspended from school for making shooting noises while pointing pencils at each other. This they think will stop gun violence in America. The teacher knew the boys were play fighting, and identified their play as pernicious because they have a zero tolerance ban on weapons. A pencil, the school spokesperson said, is a weapon when it is pointed at someone in a threatening way and gun noises are made.

Give me a break.

Since time immemorial, little boys have been playing with weapons. It seems to be an important part of how some boys express their “boyness” and have fun. I learned this slowly. When my kids were small, I decided Max could not have guns in his toy box, because gun play would lead to violence.When Max was three, his grandmother from Montreal moved to Toronto. She lived three blocks from us and did a lot of childcare, for which I was and am deeply grateful. Their relationship was strong, caring and important to both of them. Nana was also a pusher…. Of sugar. That was another thing I didn’t allow.

When Max was five, I found the gun box in Nana’s bedroom closet. A cardboard box filled with toy guns. I was pretty mad, because Nana knew the rules. Also around that time I found out how much sugar she was giving him. No wonder the kid wanted to go to Nana’s. Then there was Power Rangers. TV was also a no-go in our house, and Power Rangers was double trouble: TV and violence!

The fight with my mother-in-law was not pretty.

I wanted the child care, it was going to be by her rules. Sugar, TV and guns.

I should have known I was beaten on this one long before that, when Max was around two and he started biting pieces of toast into gun shapes and saying “Bang bang” when he pointed them. He educated me on this score. (Once in a while, on good days, I was smart enough to listen to my kids.) When he was eight we were in Toys ‘R Us buying a birthday gift and he stopped, as usual, in the gun aisle to beg for a large plastic abomination with a trigger and a barrel. I did my usual refusal ‘n’ sermon, to which he replied: “Do you think I’m going to become violent if I get a plastic gun? Do you think I don’t know the difference between play and real?”

That was an “aha” moment. I gave in. I also started giving him more space to be himself in other ways. I think it’s harder for moms to do that with boys because their culture is so foreign to us. Boys, as I came slowly to understand, use weaponry in their play not as a practice for violence, but as a way of finding and expressing adventure and action. It gives them a buzz, they get amped up. It’s their fun – and it’s play.

The school that suspended the little boys has it wrong. As did two other U.S schools. One suspended a seven-year-old boy for chewing his breakfast pastry into a gun shape, and the other did the same with a little boy who aimed his index finger at another child like a gun.

As parents, many of us struggle with our boys' desire to play with guns. As leaders, our job is to think about what boys really need - not to shut down who they are.