Why Failure is Good for Kids 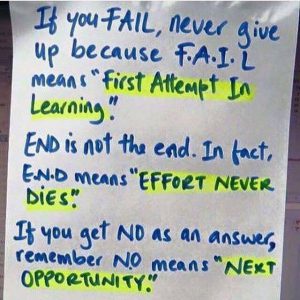 One time, about a decade ago on his regular annual camp visit, my friend Seth Godin came out of the lake in a gorilla suit. A full-size theatrical rented gorilla suit. The entire camp was watching – and waiting – because he did it at evening flag lowering.

Seth began reciting a poem. A somewhat obscure poem. Kids started scratching their heads. Staff looked on in dismay. What does this guy think he’s doing and why? Cause whatever it is, it’s sure not working.

Afterwards, at dinner at the Head Table, I struggled with what to say to Seth. He grew up at Arowhon and is now a much-celebrated marketing guru. He comes back to camp every summer to give back to the place that grew him.

And there we are at dinner, immediately after his colossal and very public misfire. I want to say something nice to him. Cause usually when someone does a skit or pretty much anything special or new at camp, we like to validate them, even if they’re an alumni visitor.

But what do you say to a guy who just flopped horribly? And who had clearly gone to the trouble and expense of renting a gorilla suit on the way up to camp from New York? I didn’t know what to say. He shocked me: “That was so great!” said Seth. I’m wondering what planet he’s on (planet of the apes?) when he follows up with a classic Seth gem: “ Every single person in camp saw me fail. I’m so excited about that.”

He talked more to me about how instructional and important it is for young leaders to see examples of taking a safe risk (the gorilla suit caper) and failing. The upside of failure, he said is that failure is an inevitable result of being creative and trying new things: If you’re never failing, it means you’re playing it way too safe.

This past summer, in a June 5 article in The New York Times they interviewed Seth  about failure. He said: “Winners are smart quitters who quit often, like when they realize their current path and decisions cannot get them any farther toward their goal. Cutting their losses allows winners to reallocate their time and energy to the things that do continue to move them forward.” There’s a whole book about this by Seth Godin: The Dip: A Little Book That Teaches You When to Quit (and When to Stick).

That day when Seth wore the gorilla suit at camp, about a decade ago, got me thinking about failure. I thought about the thousands of kids I’ve witnessed in 30 years of running a summer camp. I’ve been thinking of the winners and the losers, or, to put it more politely, the kids for whom things come easy and the kids who have to work hard for everything.

I think often of one particular girl, who is now a young woman and a wonderful member of our Senior Staff team at camp. For six years running this girl was in the Arowhon A class. This is our most prestigious and toughest swimming award, and Laura failed her Arowhon A for five years running, when she was ages 10 to 14. In the process of picking herself up off the floor and trying again, after each failure, Laura became the young woman she is today – full of grit, all perseverance. The fact of Laura passing her Arowhon A test at 15 is so much less important than the failures – for they are what allowed her to learn to persevere. No failure, no lesson in grit.

So back to Seth and the gorilla suit. He mostly comes for a few days to teach canoeing at camp, because that’s what he did growing up here at Arowhon. When he works with kids in canoes, he’s not just teaching paddling strokes. He looks for campers who have “I can’t” or “I won’t” written all over their faces, and he helps them dig deep to discover their A game. He gives them permission and room to mess it up over and over again. The canoe weaves around like a crazy critter – over and over again. And then, after hard times for the child, the canoe finally starts to go in a straight line. Because they were willing to fail first. And because safe risk is ALWAYS worth it.