We’re so excited to have over 30 campers who have converted from 2 to 4 weeks this month! After all the fun we had yesterday at Carnival Day it’s no wonder nobody wants to leave. There’s so much fun stuff to look forward to in the coming weeks (although suspense is high as nobody knows quite when it’s going to happen): Sadie Hawkins, Fake-Outs, Colour War, Arowhon-a-Palooza… sometimes we don’t know how we fit it all in!

We were lucky that the weather held out yesterday and the skies were clear over the mass of inflatable carnival toys and games. Hundreds of sno-cones, fudgesicles, and clouds of cotton candy were consumed, plenty of pies and sponges were tossed in staff’s faces, and acrobatic campers tempted the fate of falling in the lake while walked the slackline tightrope across the boys dock.

At the art booth, campers created original masterpieces that they auctioned off to staff for prizes – check out this one for which I negotiated down to 1 piece of tuck each (I think I got a deal!). 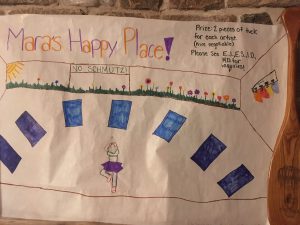 We’re excited for our first sleep-in Sunday tomorrow (the uproar in the Main Lodge when it was announced was thunderous), although of course most campers and staff will go to breakfast for the legendary buffet (smoked salmon, chocolate croissants, eggs to order… and you can enjoy it all in pyjamas wherever you want)! It will be good fuel for the 1/4, 1/2, and full mile distance lake swims offered in addition to a super general for the rest of the morning!