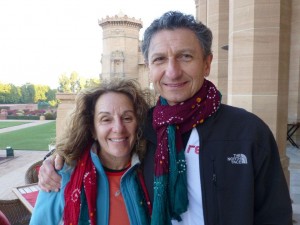 This morning before we left for work, Leon and I rubbed each other the wrong way as follows: 1)  He left the fridge open while doing something else. That always drives me crazy. 2) I passed him a Tupperware to pack our soup for lunch. He said it was too small. I said it wasn’t.  3) We got in each other’s way at the kitchen… and then the coat closet.  4) As we were about to leave for work, he said to wait while he moved Max’s car from the street into the driveway so Max wouldn’t get a ticket. I said Max is a big boy, let him take that responsibility. Leon moved the car anyway. I waited.

By the time he got into my car to drive to work, we had both worked up a good little firestorm of marital irritation.

And then we both just let it go. Consciously. On purpose. For the sake of the relationship. This 36 years together has taught me, more than anything.

How my little tale of marital squabbles relates to cabin dis-requests is very simple: Living with people who get on your nerves is the best practice there is for staying married a long time and in relative harmony. I can still identify very clearly the two or three girls in my cabin whom I disliked. Our cabin was an incredibly stable group – We were together from the time we were Juniors till our CIT year.

One of them was beautiful, well dressed, great with the boys and slightly catty. I always felt put down by her and it gives me great pleasure to run into her now, from time to time, and see that I have aged better than she has. Another of my dislikes, I see now, was just plain awkward. I didn’t see it then but I do now: She had a difficult family and was desperate for social acceptance. She was always opening her mouth and inserting both feet – sometimes in a not nice way – in her misguided efforts to get our attention.

I don’t run into that girl any more because she died last winter.

And if I had that one to do over again, I would have cut her more slack and tried to make space for her. I don’t regret the times I was nice to her. I regret there weren’t more of them.

So this is what I think about the difficult girls in my cabin, the ones I would have dis-requested if we had dis-requests in those days (which we didn’t). I think that living with them taught me to keep my mouth shut when Leon leaves the fridge open, disagrees with me stupidly (or gets in my way) in the kitchen, does the wrong thing (in my opinion) with the kids – or the dozens of other things he can do to irritate me.

If I were a better person (like he is) I would know to let it go. He does. But I needed the experience of camp to learn that lesson. It was, and is, of great service to me. Absent annoying kids in my cabin, I would probably not have managed these 36 wonderful years with Leon. Because I was not born with the skill of letting it go, and my family did not manage to teach me that. In fact my parents were both word-class holders of grudges, so at home I learned the opposite. Their words said let it go, because they were smart. But their actions did not, and kids only know actions.

So I learned it at camp, this most valuable skill of being irritated, annoyed or angry at someone in my living space… and letting it go.

A great camp lesson - getting irritated…. and letting it go